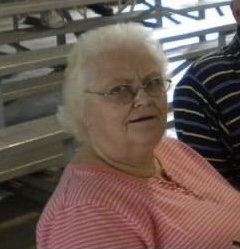 Kathleen “Kathie” H. Harmann, 78, of Saint Paris passed away peacefully in her home surrounded by family on April 4th, 2021.

She was born in Milwaukee, Wisconsin on April 27, 1942, the daughter of the late Russell and Helen (Winski) Bell.

She was married to the love of her life for 59 years, David “Dave” Harmann. They married October 27th, 1962 in Mukwonago, WI. She was preceded in death by her son, Robert “Bobby” Harmann; brother-in-law, Daniel “Butch” Harmann; sister-in-law, Wendy (Bruss) Bell, and mother and father in laws, Clarence and Dorothy Harmann.

Kathie spent her years alongside her husband Dave being the best “Shepherdess” and supporter of her time. They started out in Mukwonago, WI in 1963, they moved to Woodbury, CT where Dave worked for Van Vleck Farms, in 1990 Green Mountain Dorsets took them to Charlotte, VT, in 1997 Mithoefer Dorsets in Lafayette, IN, and in 2001 ended their moving journey to Ohio where Dave worked for Riverwood Farms until retirement. Kathie wore the title of “mom” with many that she influenced with her life. She enjoyed attending sheep shows and sales with Dave and talking with everyone, going to the casino with Dave and good friends Steve and Edie Rupe, reading, crossword puzzles, solitaire, sewing, but she really loved spending time with her grandchildren and great grandchildren. She was famous for cooking for anyone and everyone, especially at farm events.

There will be a private gathering at the convenience of the family.

In lieu of flowers, the family asks that memorial contributions be made to the All American Junior Show for the Polled Dorsets or the Continental Dorset Club ℅ Deb Hopkins P.O. Box 506 North Scituate, RI 02857.

Atkins-Shively Funeral Home is serving the family. Condolences to the family may be sent to www.shivelyfuneralhomes.com.

Holding the Harmann Family close in both thoughts and prayers,  I am so very sorry for your loss.  I have many fond memories of "life in the sheep industry" in 1960's New England.

A Memorial Tree was planted for Kathleen "Kathie" H Harmann